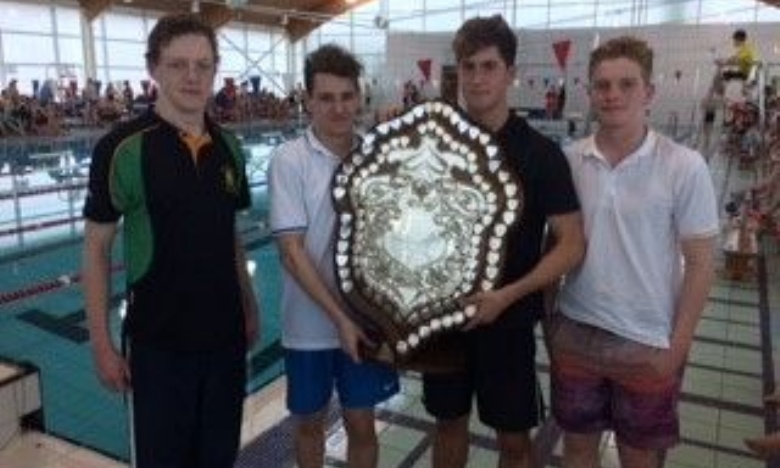 Congratulations to Theo Cannon, Cameron Lewis, Oliver Jones and Callum Bates (below) who won the Webb Trophy. This ‘Blue Ribbon’ 4x 50m freestyle event is always the first race of the summer District Competition. The trophy was first competed for in 1904 and the shield itself is a real piece of social history of the Cheltenham area with several previous winning schools no longer in existence. Balcarras won for the first time in 2016 and have now won the event three times in a row! Well done boys. Congratulations also to the girls who came third in their equivalent competition.

In the main event we had some amazing team and individual performances with strong competition from the ten schools present. The boys won the Year 8 competition, the Year 10&11 competition and the Overall Boys Trophy for the event. The Year 8 girls team won their event and the Girls Squad came 2nd overall in the whole team event. Well done all.

Jess Johnson and Charles Palmer came first in the individual time trial across all the age groups with the Year 8 girls and Year 9 boys both winning their race with the year 8 boys coming 2nd. The winners will now go onto the level 3 county tournament at Hartbury College.

Celeste Godden has been selected from her County Academy to represent that The Nova Academies, which is the next step for players as part of the England Netball Performance Pathway. The Nova Academies provides talented U17 players with weekly training sessions, strength and conditioning programmes and provision, high level technical training, as well as sports therapy and off-court support. Celeste has been selected from the Nova Academy to trail out for the for seven stars U17 netball team on 25th May. This is a huge achievement. Congratulations.

Well done to year 8,9,10 and 11 for taking part in their district netball tournament. Each year played well but unfortunately, did not make it through to the quarterfinal.

A huge congratulation to the year 7 netball team for coming 2nd in their district netball tournament. The girls have been working hard all season, practising most lunch times. They are a very committed group of girls who have made so much progress since joining Balcarras in September. The girls worked incredibly hard during the tournament beating Chosen Hill in extra time during the semi-finals. They then went on to play Cheltenham Ladies College in the final.

Each netball team has been very committed this year and over 40 students came to training weekly. All of the girls managed to play in at least one fixture. In February the Year 7 A, B and C teams all beat St. Edwards. It was a lovely day for Netball at Balcarras.

The year 7 football team came 3rd in their district football tournament. The girls played well and enjoyed the opportunity to play all the local schools. Congratulations!

Congratulations to the following students who received their County Badges for representing their chosen sport either in school or for an out of school team. The variety of sports shows what a range of activities you all compete in and you are role models for others in the school. Good luck to you all with your continued participation and future success.

Year 7 played the usual programme of fixtures. The highlight of the Autumn Term was reaching the final of the Churchdown School 10's where they lost 5-10 to a big St Peters team. The 15-a-side Spring Term started slowly with many matches being lost because of repeated snow. However, the boys  played some excellent rugby with the highlights being excellent fixtures against Pates, Chosen Hill and St Edwards.

The Year 11 team continued to make good progress in their game play, often getting themselves into good scoring opportunities. They managed to finish third in the district competition, running the top two schools close in the games against them.

The Year 10 team having won the District and County competitions in Year 9 continued to dominate in the District league, comfortably winning their games and retaining the District title.  Unfortunately, there is no County tournament in Year 10 and so they were unable to defend their title and get the opportunity to head into the regional competition.  September will see the defence of their District title and if successful here the chance to move onto the County tournament.

The Year 9 team have been very keen on training and improving both their skills and game play.  Having shown good potential at the District tournament back in December the boys have continued to make great progress going into the District league.  Having lost their first game against Pates they really rallied to show the type of basketball they can play, winning the remainder of the games and becoming joint District league winners.

Another busy spring term of football fixtures with lots going on. It was a bit of a squeeze to get in all of the fixtures due the bad weather this term so many thanks to all of the players and coaches who managed to rearrange their time.

Year 11 started well in the District Knock Out cup with a strong 6-0 win over Pitville School but then played Chipping Campden, last years County Champions, in the quarter finals. We gave them a great game only losing 1-0 to an excellent driven goal from outside of the area. Many thanks to Carl Langdon who captained the team this year.

Year 10 had a much better season than last year when they didn’t win again. A change in formation at the beginning of the season seemed to make a big difference as we beat Cleeve School 9-1 and then Cotswold School 2-1. A couple of key injuries meant that we struggled against some big physical sides losing 5-3 to Tewkesbury and 2-1 to Prince Henrys but the lads that stepped in did a great job and the results were much closer games than previous years. We finished the season with a 5-4 win over Chosen Hill to finish 3rd in the group. Congratulations to Harvey Brookes who scored a hat-rick in the final game and thanks to Charlie Poulson who led the team this year.

Year 9 have made it through to the District Final stages after another fantastic season. Many thanks to Mr Rothwell who has taken the team this year. They have gone through the group rounds with a 4-0 win over Winchcombe, 3-1 win over Chipping Campden, 3-0 win over All Saints and an 8-1 win over Pittville School. A 2-2 away draw against Tewkesbury was the closest and toughest game. The team went on to beat Cleeve School 2-1 in the Semi-Final but lost 4-2 to Bournside school in a repeat of the final from last year.

Year 8 in their first season gave a good account of themselves. Over 40 boys regularly attended training making team selection quite difficult. It was great to see so many of you committed to getting involved in extra-curricular sport. The season started well with a 3-1 away win at Cotswold, we then game up against an excellent Cleeve team losing 5-0 before getting back to winning ways with a 5-2 win against Tewkesbury. In the final game we lost 4-1 to Chosen Hill which meant we finished third in the group but a positive feeling of having played some good football along the way with lots of improvement. Thank you to Archie Rendell for being the team captain this year.

Year 8 Football after an away win at Cotswold

The sixth form team did not have a great season after winning the District Cup last year. In a new County Competition, we finished joint bottom of the group with losing to Chosen Hill, Pates, Sir Tommy Richies and All Saints. We scored 2 goals and conceded 18 meaning we have lots of work to do next season!! Thanks to Aidan Laker for taking the captaincy this year.

Congratulations to Matthew Kear and Mitchell Davies, both in Year 9, who have been chosen to represent the Cheltenham District Squad in a series of games around the region. Good luck to you both for the season.