A Year of Remembrance

It is 103 years since Britain observed the first Remembrance Day on 11th November 1919. Every year since we have paused at 11 o’clock to remember those people who lost their lives in that conflict and subsequent wars.

The war of 1914-18 had been a cataclysmic event for Britain, Europe and much of the world, hence it became known as The Great War. It was only in the early days of the 1939-45 conflict that it was referred to as the First World War. By then it had become painfully apparent that it was not, after all, ‘the war to end all wars.’ Sadly war continues to be a tragic part of the human story to this day.

In the last six months 11 Ukrainian youngsters have joined the Balcarras community and I have to say I have been humbled by the way that they have adapted to life in a new school, a new town and a new country. Their lives have been upturned by the scourge of war and by terrible events beyond their control. Most of us talk of war in the past tense yet for these youngsters it is very much part of the present.

When we observe remembrance, we honour the sacrifice of those who laid down their lives in defence of liberty. It is tempting therefore to see remembrance as an act of appreciation for those who fell. Yet war affects those who survive the carnage as well. They live on in a familiar but forever changed reality. It is impossible to fully comprehend the misery and chaos created by war but fitting that we should try.

My paternal grandparents, Alice and John Burke, both survived the Second World War but their 21-year-old son Austin did not. A Trooper with the 22nd Dragoons, he was killed in a flail tank during the British breakout from Caen in the weeks after D-Day. I never met my grandmother, she died in 1974 three years before I was born, but I was told by my parents that she never really recovered from the tragic loss she had suffered.  I often think of her during the silence at Remembrance Day. What must it be like to lose your child in war?

After the war subsidised visits were arranged to the cemeteries in which British and Commonwealth troops had been buried. My grandparents turned down the opportunity to see his grave at the Commonwealth Cemetery at Ranville, close to Pegasus Bridge. Although this might seem surprising, I don’t think they were ever able to accept that they had lost him to the brutality and savagery of war.

This summer I took my two sons to visit his grave. We stood in the early morning sun, in the beautifully manicured cemetery at Ranville, and paid our respects. My uncle who I never met was apparently keen to do his duty and made the decision to join up. He lies buried alongside hundreds of others who made the same decision and ultimately paid the same dreadful price.

Earlier in the year I had travelled with 100 students from Balcarras to the First World War battlefields of the Somme and Ypres. Today this part of the world is tranquil and peaceful making it hard to imagine the chaos and destruction which happened here on an industrial scale.

I have heard it said before that we in Britain are obsessed by the wars and I certainly think we are unusual in that hundreds of schools up and down the country organise similar visits to the one that we did. However, I personally believe this is a good thing. Understanding how war destroys life is important in building a world where all of us reject violence and instead commit to resolving our differences by dialogue.

The trip visited several battlefield sites, cemeteries and memorials. At the Thiepval Memorial, I found the name of Charles Gara, who died on the third day of the Battle of the Somme. He was my great uncle and the brother of Alice Gara, later Alice Burke. The memorial, designed by Sir Edwin Lutyens, was inaugurated by the Prince of Wales (later Edward VIII) on 1st August 1932. It is an incredible sight, and it is impossible not to be moved as one observes the sheer number of soldiers—72,337 named on the memorial—who died without a grave.

At the town of Ypres there is a similar memorial called the Menin Gate which contains the names of 54,896 British and Commonwealth soldiers who were killed in the Ypres Salient and who have no known grave. It was designed by Sir Reginald Blomfield and was unveiled on 24th July 1927. On the 2nd July 1928 the citizens of Ypres decided to organise a ‘Last Post’ ceremony to honour those who had given their lives in defence of Belgium. This ceremony has taken place at the Menin Gate at 8pm every day since, with only the period of German occupation during the Second World War disrupting this solemn act of remembrance.

Our school visit attends the ‘Last Post’ every year but this July two students, Lake Cleaves and William Pearne, were able to take part in the ceremony. Observing them laying a wreath in respect of Lake’s ancestor who is named on the memorial, in front of thousands of people, during this most solemn and moving ceremony, was possibly the most poignant and emotional moment of my career as a teacher.

On November 11th I will conduct my third act of remembrance of the year by leading the Balcarras community at our Remembrance Ceremony around the flagpole. When I make a speech at the school I very rarely write it out beforehand. On this occasion I always do because I view it as one of the most important addresses of the year. I will try as best I can to urge our young people to remember not just those who paid the ultimate price for the tragedy of war, but those who lived on only with the cherished memories of the loved ones they had lost. 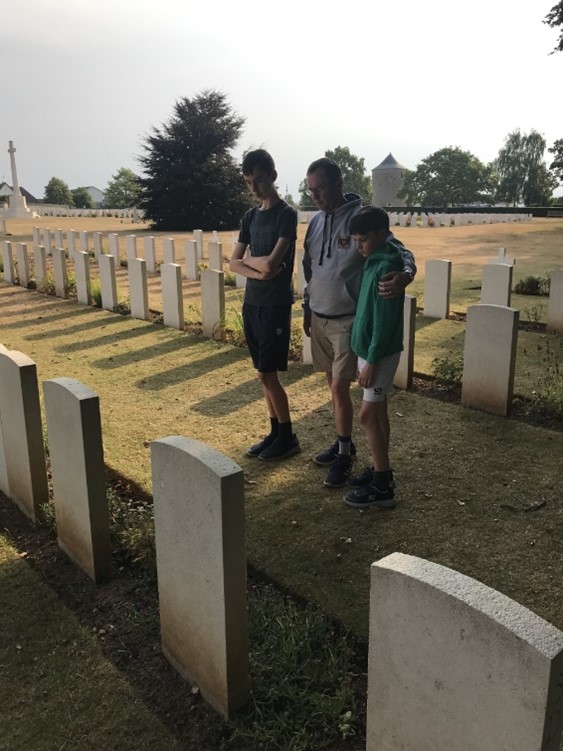 Balcarras headteacher Dominic Burke with his two sons at the grave of Trooper Austin J Burke at the Commonwealth War Cemetery at Ranville, France. August 2022. 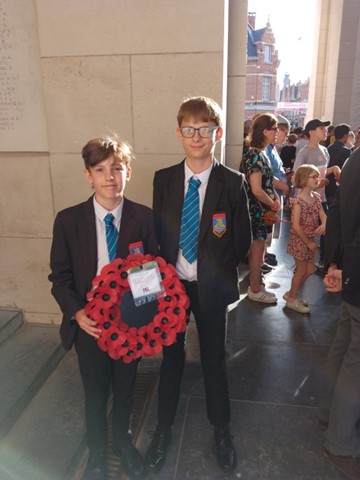 Balcarras pupils Lake Cleaves and William Pearne prepare to lay a wreath at the Last Post Ceremony at the Menin Gate, Ypres. July 2022. 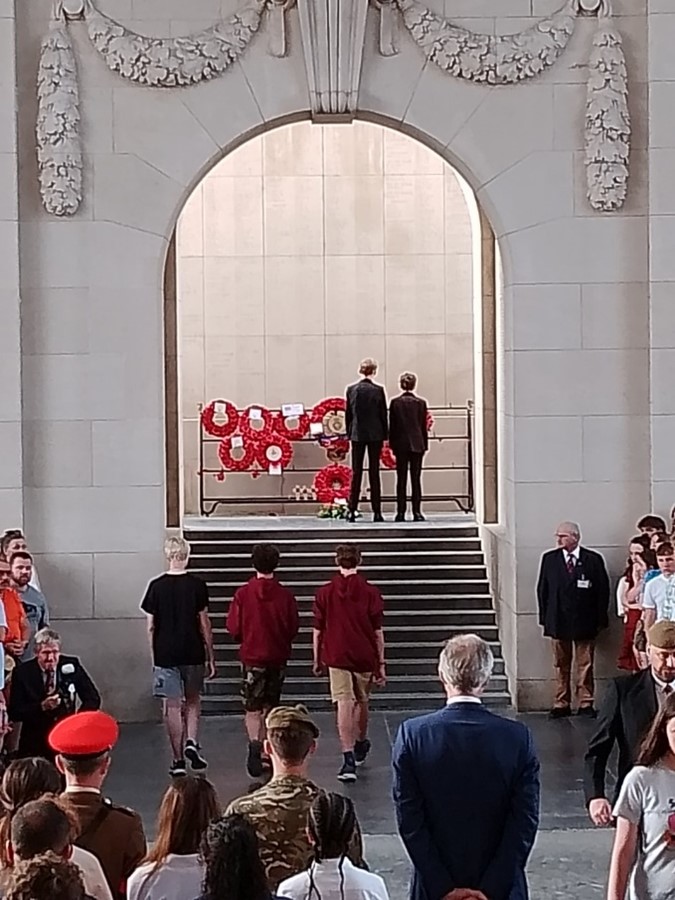 Balcarras Pupils lay the wreath in honour of the ancestor of Lake Cleaves who is commemorated on the Menin Gate.

Balcarras pupils listen to our tour guide Mike Fitzgerald at the Lochnagar Crater on the Somme. July 2022

Balcarras pupils are guided around a surviving section of the trench network close to the Ulster Tower on the Somme. July 2022.