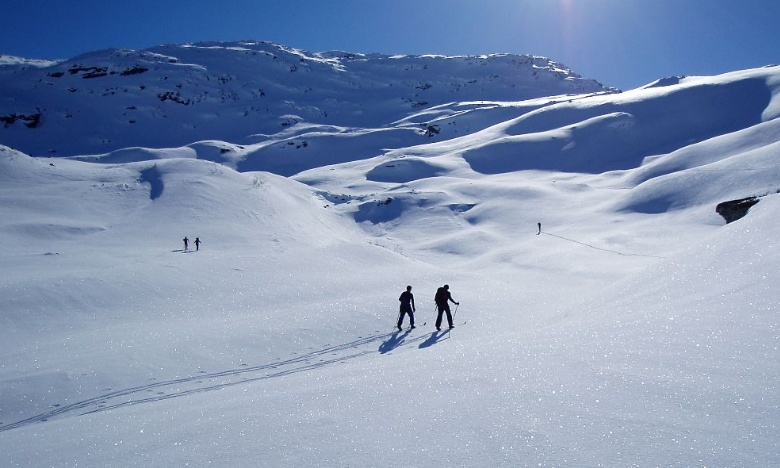 Following the success of last year’s trip, our school returned to the idyllic scenery of Norway’s mountains to enjoy another February half term away skiing and, despite the cold conditions and tiring ski sessions, it is safe to say that the trip didn’t disappoint!
Bleary eyed and half asleep, the group assembled at school in the small hours of Saturday 16th February ranging from those who were yet to face the snow to the potential candidates for Ski Sunday (Shona Birch, we’re looking at you). Despite this, everyone shared the excitement about what was to come as we began our journey to Gatwick.
Arriving in Norway was unlike anything else: the quaint little houses; the frozen lakes; even the winding roads that led us to the Myrkdalen Ski resort not far from Voss all gave places like the Lake District a run for their money. Myrkdalen itself followed suit with the outstanding views of pine forests bordering the slopes- they were enough to make you forget that you were about to throw yourself down a mountain at high speed. Almost.
The week offered so much for both students and teachers with the four different ability groups undertaking 5 hours of skiing per day, which were then followed by a range of evening activities such as night skiing, tobogganing and swimming at a local leisure centre. Each day, skiers met with their instructor, challenged themselves and continued to improve in both technique and confidence. Although teachers were not always involved in this group work, they too were able to explore the slopes that Myrkdalen had to offer so that, in the evening, everyone could share their triumphs (and flops) with the rest of the group. In fact, we even resorted to playing ‘Name That Slope’ with Miss Langford and Mrs Corinaldi as the quiz masters (it should be noted that this was the fourth day of the trip, by which point exhaustion was beginning to set in).
By the end of the week, everyone had not only demonstrated resilience during this demanding level of activity, but had also made Balcarras proud in behaviour around the public, with acts of kindness such as that of Millie Tombs helping a little boy who had fallen off the nursery button lift and was struggling to get back up. However, whilst every member of the group should be proud of their personal progress, there were- as with every ski trip- some serious laughs. Surely, the most memorable and outrageous falls must have come from those with little ski experience? It was quite the opposite. Some of the most notable belonged to top group with Oliver Powell smacking his back on a tree (but he caught it on the Go Pro, so we all got a laugh out of it), and Bertie Burrell ending up in hospital with a pair of crutches as a souvenir.  It is also worth mentioning Norway’s Next Top Model: Mr Dean himself. Clad with florescent green and yellow gear, he became quite literally a glowing beacon of hope for any stragglers on the slopes as a guide back to the bottom; perhaps that was the true reason behind the sunglasses on the kit list.
In all seriousness, the trip would not have been half as good without the group of teachers and students who came. Everyone provided both care and support for other members which, when it comes to skiing, are arguably the most important things. A big thank you to Mr and Mrs Dean for the time and effort they invested into the smooth running of the trip and even for fitting in a quick shopping trip in Bergen on the way home!
The February 2019 Ski Trip gave us all memories that we’ll never forget (and, in some people’s case, that they will never live down). UNTIL NEXT YEAR!